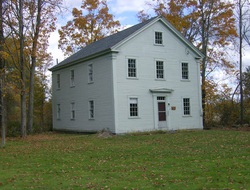 Very early records of the Nottingham schools are incomplete. But we know that classes were held in the meetinghouse on the Square until a schoolhouse could be built. As families settled in areas away from the Square, it was necessary to establish additional schools. As the town population increased, the Square attendance was divided into four school districts and others were added as the need arose. Eventually there were thirteen – Square, Center, Bean Hill, South Summer, North Summer, Independent, Gebig, Lower Turnpike, Mountain, tavern Hill, Upper North and Lower North.

There usually were two sessions, the Fall term and the Spring term, the length of which was determined by weather and attendance. The parents of school children were solely responsible for the schoolhouse in their district. A school tax was levied, a specific amount of firewood was required from each family to heat the school, and school repairs and the boarding of the teacher were also the responsibility of the parents.

In was not uncommon to have thirteen schools open one year and seven the next. A decrease in population was apparent in 1901, when only nine schools were in operation. The decline continued until 1904, with six schools open. It was decided to close some of the least-attended districts and North Summer was the first to shut down, the students being transferred to the Center School. The first bus routes opened with the total fill for 1902 coming to $96.60.

The Mountain and Square schools closed in 1920. Consolidation of the system continued and in 1921 there were four schools in three buildings; a year later, two schools remained – Center and Gebig. In 1926, a school lunch program began; 1927 saw the first health program and the first PTA was organized.

During the 1930’s and 40’s, elementary school enrollment dropped to 38 and Gebig was closed, but by 1951, thee were 50 students and Gebig was reopened. In 1952, construction began on the Nottingham Elementary School, with dedication ceremonies the following year.

In 1954, the Center (or, Dame) School was moved to its present site.
And, of course, to bring this history up to date, construction of the new Nottingham Elementary School began in 1994, with the opening in 1995, and the ‘old’ school became our Community Center. 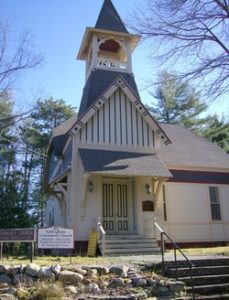 In 1798, a potential minister for the town was offered an annual salary of 300 dollars, twenty cords of good hardwood, and the use and improvement of the hundred-acre school and parsonage lots. The minister, however, declined the offer and the next year no money was voted ‘for preaching’. So went the course of religious matters in 1798.

In 1997, a few years later, we have three churches and our ministers probably do better than 300 dollars a year (at least we hope so.)
Community Church – Located at the corner of Church Street and Rte 152 and built in 1881, this church, in the ‘American Gothic’ style, was originally a Universalist Church; it has a large bell and most of its old interior and exterior features have been retained. An ell built onto the church contains classrooms and a dining/meeting area. Since then, the church suffered a fire, but was rebuilt.

Liberty Baptist Church – Located on Freeman Hall Road and built in 1892, this church is in the ‘New England Meetinghouse’ style. Prior to its construction, services were held in the schoolhouse at Gebig corner and in Freeman Hall. The church has fine old features such as tin ceilings and stained glass windows.

Freeman Hall – Located at the corner of Freeman Hall and Garland Roads and built in the mid 1800’s, this large old meetinghouse, presently owned by the Liberty Baptist Church, has had a wide variety of functions, including a store, which once was run in the basement. It has served as the community center for West Nottingham and has seen its share of dances, graduations and other social gatherings.

Congregational Church – Located on Route 152 and built in the mid 1970’s, this church is in the meetinghouse style and was designed and built along the lines of a Revolutionary period church in Newington. 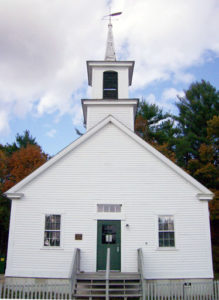 The original center of the town was the Square. The petition to the King required that the ‘town compact’ (i.e., the Square) be situated “in as defensive a posture as the land will allow”. A historian later described it as “beautiful for situation. It was upon the height of a large swell of land, gently sloping in every direction. The blue waters of the Atlantic, and the white canvas of vessels entering the harbor of Portsmouth, could be distinctly seen; while little lakes sparkled like gems in the wilderness, and Pawtuckaway mountain gracefully rose in the west, and Saddleback in the more northerly direction, and babbling streams, affording ample waterpower, found their way along the valleys.”

The Town Hall was built in 1856. The structure was referred to in 1856 documents as a Town House. It was finally built after much debate and defeated motions. Subsequent improvements called for two main water courses (troughs) in the main road near the house, stones to protect the rear corners of the building, and “fixtures around said town house to hitch horses”.

The Grange Hall was built in 1841. This beautiful old building was a church on Northwood road (Rte 152) near the Gile Road intersection. In 1860, it was cut in two and moved to its present location, where it served as a meetinghouse for the Patuccoway Grange. In recent years, the Nottingham Historical Society created their Patuccoway Grange Museum, featuring implements of farming and early industry/home life in Nottingham, with many donations from local and nearby town’s residents. The museum opens seasonally and by appointment.
The Dame/Center School was built in the early 1800’s. This schoolhouse began as a church in Nottingham center (where the fire station is now). About 1870 it was first used part-time as a school, and then, in 1878, full-time, when the Universalists Church was completed. It was moved across the road to its present site in the 1950. In recent years, the old elementary school was turned into a community center and one wing now houses the town’s police department. The Van Dame School Museum and Research Center was moved away from the community center to facilitate the police department and parking. It now stands alone and is open weekly to the public to tour the museum and/or for research.